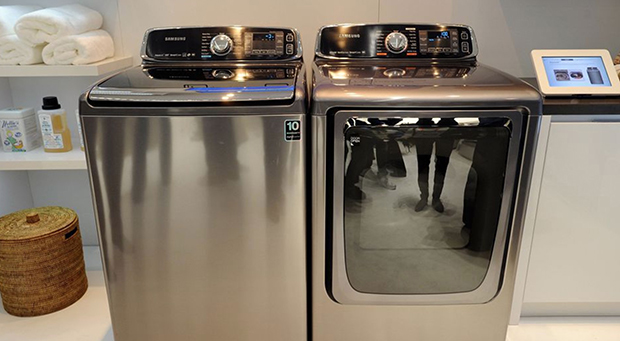 It really has not been a great few weeks for Samsung. First, their Galaxy Note 7 hit the headlines multiple times after being recalled due to their risk of exploding and catching fire, causing various injuries. Now, just weeks after that PR nightmare comes another; they are having to recall 2.8million of their top-load washing machines for eerily similar reasons.

34 of their top-load model washing machines have been recalled after well over 700 complaints by customers. It seems that the drums of these particular models may lose balance during a cycle, causing excessive vibrations leading the top to separate from the main washing machine, rather violently. This has already caused at least nine injuries, including a shoulder injury and a broken jaw! Some customers have compared the malfunction to an “explosion” and claimed that it has damaged their homes when it has combusted.

Earlier this year, two customers filed a lawsuit against Samsung when their washing machines blew up – one, belonging to Michelle Soto Fielder, exploded with such power that it made a significant dent in the wall of her garage, pushing through to the living room on the adjoining wall! Luckily no one was in the path of the machine as it could have been catastrophic!

Another example of the issue comes from Melissa Thaxton who’s Samsung washing machine exploded terrifyingly loud right in front of her and her young son. The two screamed, understandably, thinking that the sound was a bomb. Thankfully, neither were injured, but of course very shaken.

This particular problem is said to arise when the machine is put on a high-speed spin cycle with items such as bedding, water resistant clothing and anything that could be considered quite bulky. The weight of these things, with the loose machine top, seems to cause the explosion which has frightened and injured a fair few people.

There was a similar recall, back in 2013 in Australia, when 150,000 Samsung washing machines were recalled due to a high risk of fire. These were, again, top loader machines, manufactured between 2010-2013, so it seems that Samsung has not had a lot of luck with these machines over the past few years.

Which washers are affected?

These washers have been sold between March 2011 and November 2016, costing between $450 – $1,500, at various home appliance stores, including The Home Depot, Sears and Best Buy.

What are your options if you have one of these faulty washers?

Samsung is offering several different actions for those affected, dependant on the age of the machine and various other factors.

If you bought the washing machine, new, in the last 30 days, you are able to request  a full refund from Samsung, although this may take a little while to process.

There is also the option for a free in-home repair service to strengthen the top of the machine and a one-year warranty extension, regardless of your current warranty. If you don’t tend to wash bedding, or bulky items, or feel that there is much of a risk and are otherwise happy with your machine, this is a simple option.

You are also eligible to request a replacement. This will involve a cash rebate from Samsung, redeemable against the cost of any new washing machine, regardless of manufacturer. This also includes free installation of your new machine and a free removal of the old model. Although this is available to redeem on any make and model of washing machine, Samsung is offering an extra added bonus, up to the sum of $150 for anyone who chooses their own brand again as a loyalty incentive.

Of course, this is all likely to be quite a lengthy process, with so many machines to recall, and so there are some precautions to allow you to use your washing machine safely, in the meantime. Samsung and the Consumer Product Safety Commission are advising owners of the affected washing machines to avoid the cycles that have been shown to cause a problem.

If you are needing to wash bedding, bulky items or anything water-resistant, anyone with the recalled machines is being told to use the delicate or waterproof cycle to minimize the risk.

Anyone who is known to have one of the washing machines on the list of those affected will be automatically sent a set of labels in the mail. These kits will consist of two warning labels for the washing machine (and instructions on their application) and a new guide for the control panel. These should help to keep the washers running safely until they can be fixed or replaced.

Thankfully, these incidents have been rare, and Samsung has reacted quickly. If you follow the instructions given, the risks should be minimal, while you wait for either a replacement or for an engineer to come and fix the issue. If you have bought a Samsung, top loader washing machine between March 2011 and November 2016, be sure to check whether the product code is listed as affected, and act accordingly. When an appliance is in your home, it is best not to risk it, especially so close to Christmas!

Let’s hope that things settle down a little for Samsung and that they have more luck with their products over the next few months!